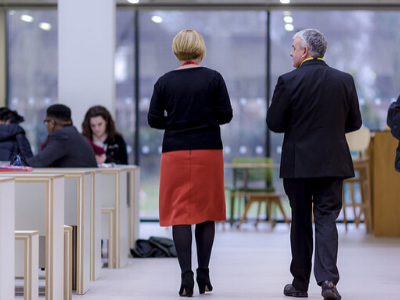 The Chartered College of Teaching has joined together with other organisations that have an interest in the recruitment, training and professional development of teachers to raise their concerns about the teacher shortage and suggest practical solutions to the issue.

Alongside the Chartered College, the National Association of School-Based Teacher Trainers (NASBTT), the Universities’ Council for the Education of Teachers (UCET) and the Teaching Schools Council (TSC), have all signed a letter to the government with five recommendations to combat the recruitment shortage.

The letter recognises steps which the government has already taken, notably: the removal of caps on most recruitment to ITT programmes; the relaxation of skills test requirements; efforts to reduce teacher workload; the continued payment of ITT bursaries; and the introduction of some retention incentives.

In addition to this, the letter calls for a series of further measures, including:

To consider waiving tuition fees for those on postgraduate ITE programmes and the usage of bursaries to directly fund ITT
Giving all teachers an entitlement to CPD
Simplifying the way different routes into teaching are described
Improving to the application process
Replacing the skills tests with on-course assessments of literacy and numeracy skills.

The full letter is as follows:
Dear Secretary of State,

We are writing on behalf of the organisations with an interest in the recruitment, training and professional development of teachers to share our concern about teacher shortages and make some constructive suggestions.

We welcome the measures already taken to address the supply crisis, particularly: the removal of caps on most recruitment to ITT programmes; the relaxation of skills test requirements; efforts to reduce teacher workload; the continued payment of ITT bursaries; and the introduction of some retention incentives. We also think that the proposals outlined in the ‘Strengthening QTS’ proposals have great potential, provided they are properly funded and that the emphasis is on supporting teachers through CPD rather than on adding additional barriers to people to becoming qualified. For our part, we are active in collecting intelligence on recruitment from our respective communities and sharing that, alongside possible remedies, with our colleagues at DfE. We are also in the process of developing new materials for marketing teaching as a profession, which we envisage will complement the ‘Get into Teaching’ campaign.

There are a number of reasons for the supply crisis. Some are demographic, with pupil numbers forecast to increase at the same time as the number of people in the age group that typically enter the profession is in decline. Others are economic, with increased competition from employers for a decreasing pool of graduates. Negative perceptions about the status of teaching as a career, the cost of training, concerns about workload and doubts about teaching’s status as a profession are also having an impact.

We suggest the following measures to add to those already being taken:

Funding: We are now in the second year of graduates completing three year degree programmes having accumulated annual tuition fee debts of £9,000, as well as significant maintenance loans. With a relatively small number of exceptions, even those trainees receiving bursaries will be expected to accumulate more debt to become qualified or, at the very least, forgo the opportunity to embark on alternative salaried careers. We have received reports of people being dissuaded from entering the profession, or being counselled by parents and others from doing so, for this very reason. Consideration should be given to waiving tuition fees for all those on postgraduate ITE programmes. Funds used for bursaries could be used to directly fund ITT, as could the resulting administrative savings and the money currently loaned to trainee teachers that may never be paid back.
Enhance the status of teaching by: giving all teachers, especially those at the beginning of their careers, an entitlement to (and expectation to utilise) CPD, and taking steps towards teaching becoming an all Master’s qualified profession; and subsidise membership of professional bodies and subject associations for teachers early in their career to ensure they have access to professional learning. These measures would help with both recruitment and retention.
Simplifying the way in which the different routes into teaching are described. These can appear unnecessarily confusing. There are, in effect, just three main qualification routes: undergraduate; postgraduate; and employment-based. Attempts to explain the difference between the various sub-categories (many of which overlap) that fall under each of these headings has only served to over-complicate what could be described in relatively straightforward terms. An example of how this could be done is attached as an annex to this letter.
Improve the application process. UCAS systems often appear cumbersome and can be slow at responding to changing needs. For example, we have been pressing for years for scope to share applications amongst different providers within the same ITE partnerships, and yet such an apparently straightforward idea is only now being seriously considered by UCAS and DfE.
Replace skills tests with on-course assessments of literacy and numeracy skills. This would release £15 million for investment in CPD, fee-waivers and other measures, speed up the recruitment process and remove a barrier to the profession. It would not entail any kind of ‘dumbing-down’ as the robustness of on-course assessments could be checked by Ofsted as part of ITE inspections.
We would welcome the opportunity to discuss these issues with you in more detail.